“For me as a West Country man born and bred, brought up in Devon, educated on Exmoor and with so many of my formative years spent in Devon and Cornwall, returning after a break of some years was a special treat.  As a child and on into my late twenty's my family always kept a boat on a mooring on the River Fal and my happiest memories from forty odd years ago are of pottering up and down the Cornish South coast, but I had never visited either Looe or Polperro.” Tim Wonnacott

What would you recommend visitors to Talland Bay do?

Make the most of the hotel’s seaside setting. Talland Bay beach, just a few hundred yards below the hotel, is charming and definitely worth a visit. A stroll eastwards will take you to the Parish Church of St Talland, built of local stone more than five hundred years ago and now deliciously patinated in lichen, with a belfry peeking over the cliffs. The area’s colourful past is recognised by the grave of Robert Mark, said to be a Polperro smuggler who was shot and buried nearby in 1802.

The dramatic position of the hotel ensures that whatever the weather is doing your eye is drawn to the sky and sea.  If the weather is fine, take a wander along the South West Coast Footpath, which runs yards from the hotel’s front door.  At 630 miles this is the longest National Trail in the country, and in these parts was first used by patrols of coastguards and excise men trying to eradicate wrecking and smuggling.

Is Looe worth a trip?

In the old days I remember a lot of Cornish ports as being rather run down and with few facilities and attractions BUT boy have things changed! Looe positively hums with activity centred around the fishing industry and an endless variety of both old and new craft to see.  As they say “running through the veins of every true Englishman is a fair degree of salt”, and the harbour in both East and West Looe acted as a magnet for me. I was greeted at the lifeboat station most regally and the shops and eateries are a testament to the town’s popularity and prosperity.

I was lucky to get a table to eat at the excellent Old Sail Loft Restaurant, which is owned and run by a local fisherman so the specialities have literally come out of the water only hours before. I had the Lobster, which was just delicious. I would go so far as to say this was the finest lobster I have ever tasted and a must if you like the king of all the crustaceans. 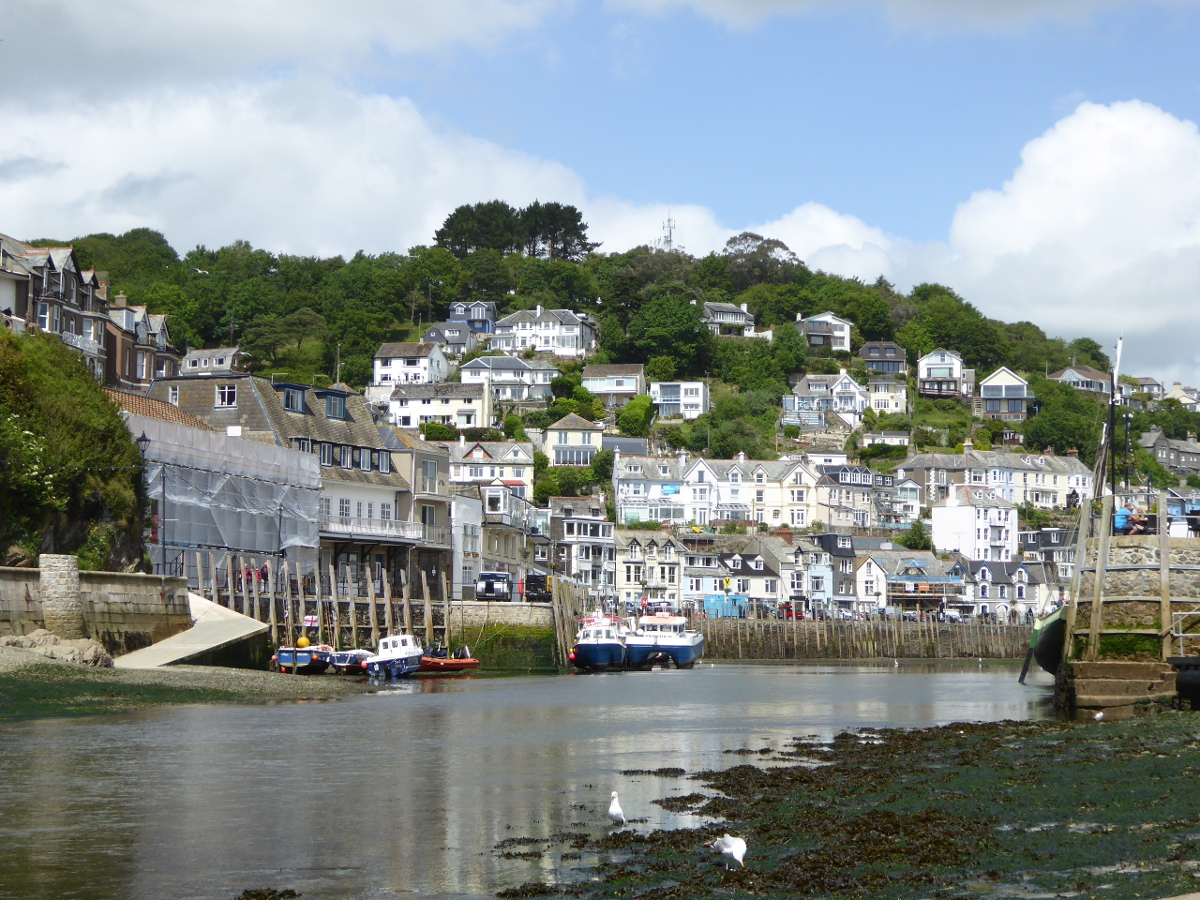 Do you have any other tips for foodies?

Be sure to sample Nick Hawke’s food at the Talland Bay Hotel. There are two dining arrangements: the fine dining Terrace Restaurant and Brasserie. The fine dining option includes an amuse bouche and up to three courses, the last preceded by a pre-dessert appetiser: all quite delicious.

Breakfast and a less formal dinner in the Brasserie are enjoyed in the modern glass conservatory opening out on to the Mediterranean style garden and, whichever option you choose (and we tried both), the service and quality of food were difficult to fault. Not surprising when the chef is Michelin-trained and his fiancée also acts as Maitre D …a perfect recipe to ensure that the place runs like clockwork. 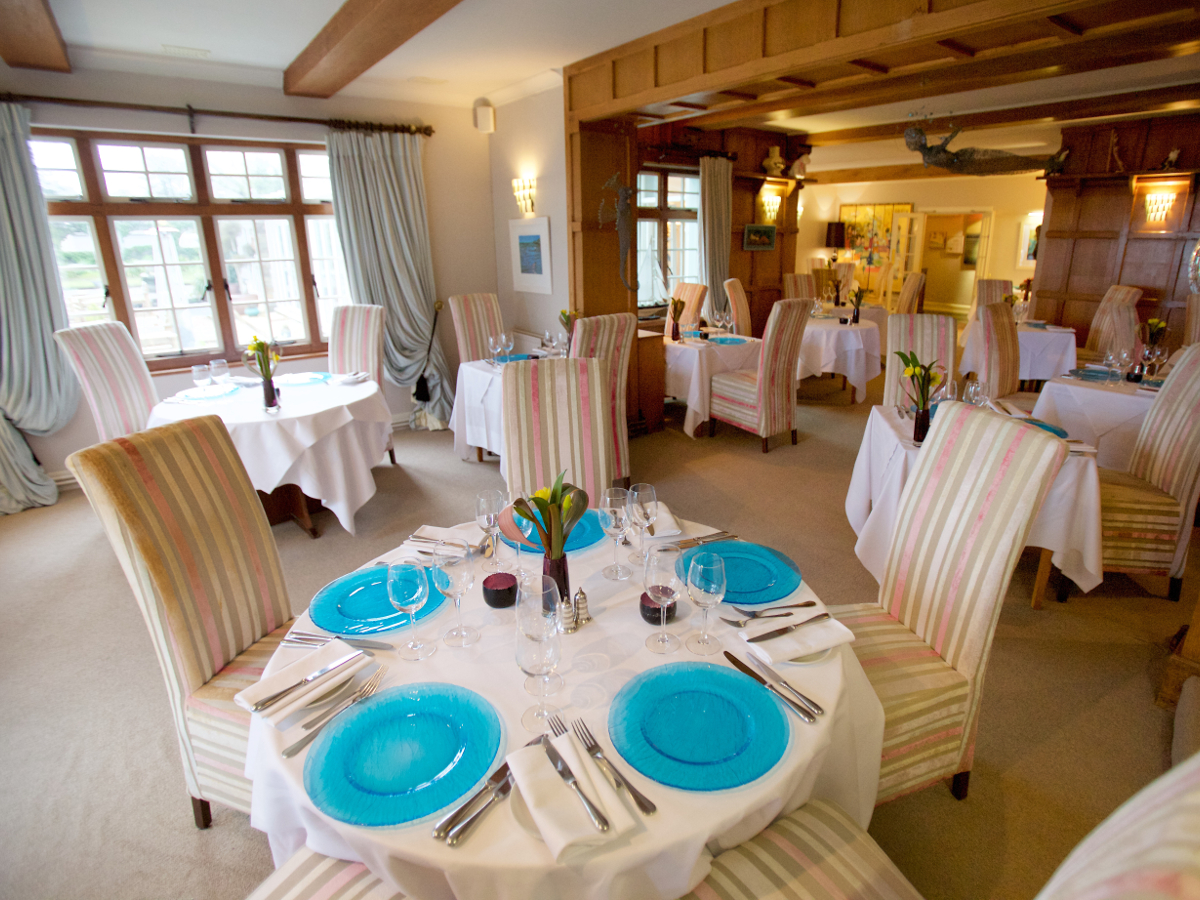 Where else did you explore, did you visit Polperro?

It was a ten minute trip to Polperro from the Talland Bay Hotel, and what an extraordinary place it is. Described as “the most picturesque of all the Cornish Fishing Villages” this is probably not far off the mark. We visited at the time of the colourful Polperro Festival with bands and characters parading the streets in mad costume, which despite the drizzle did not dampen their ardour! All great fun and oozing with character. 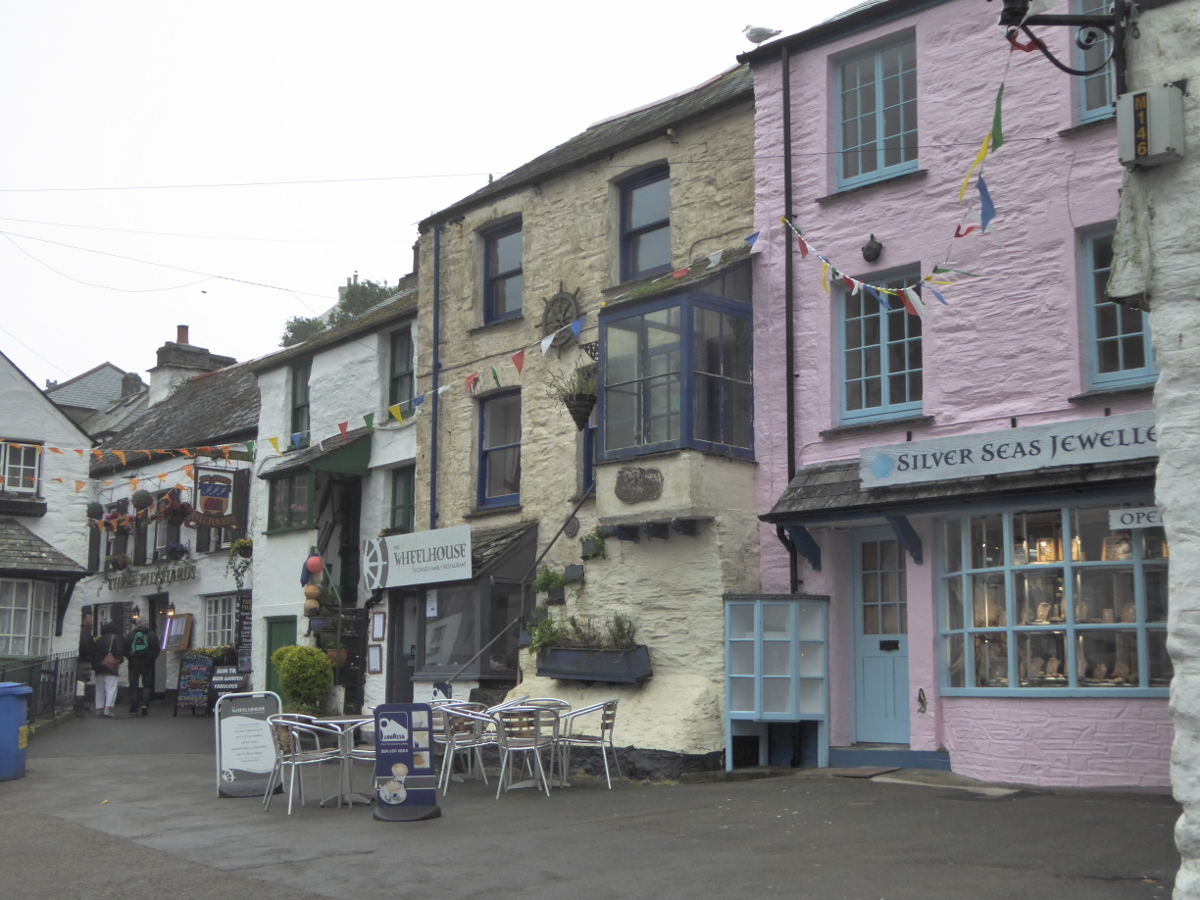 What else would you recommend doing nearby?

If gardens are your passion then there are some absolute stunners.

The nearest National Trust house to the Talland Bay Hotel is Antony on the Rame peninsular three miles West of Torpoint.  Home to the Carew Pole family for eight hundred years and still occupied in part by them, the house is magnificent in its own right but equally good are the Repton-designed grounds including the famous topiary, knot garden, national collection of day lilies and a fine woodland garden. In short something for all tastes and clearly Walt Disney loved it enough to use the place as the set for the film Alice in Wonderland, directed by Tim Burton. I was certainly bewitched. 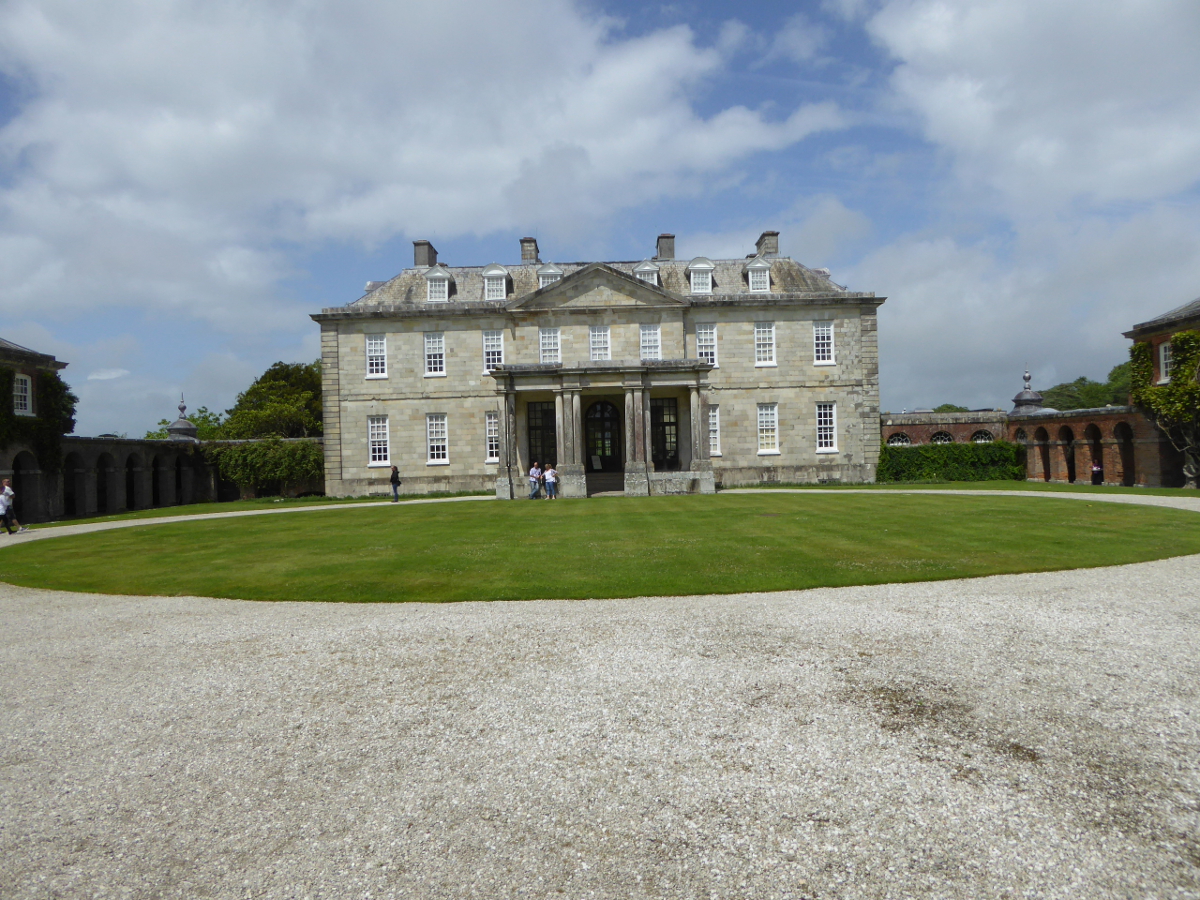 Another smaller and privately owned garden to put on the list is “Hidden Valley Gardens” five miles North of Fowey. Just three and a half acres of cottage style garden created by Tricia and Peter Howard over a twenty year period and with lots of home propagated plants to buy and take home.

It was with a real pang of regret that I said goodbye to the Talland Bay Hotel with its zany interiors, delicious food, excellent service, magnificent position and what I call “olde world charm”! 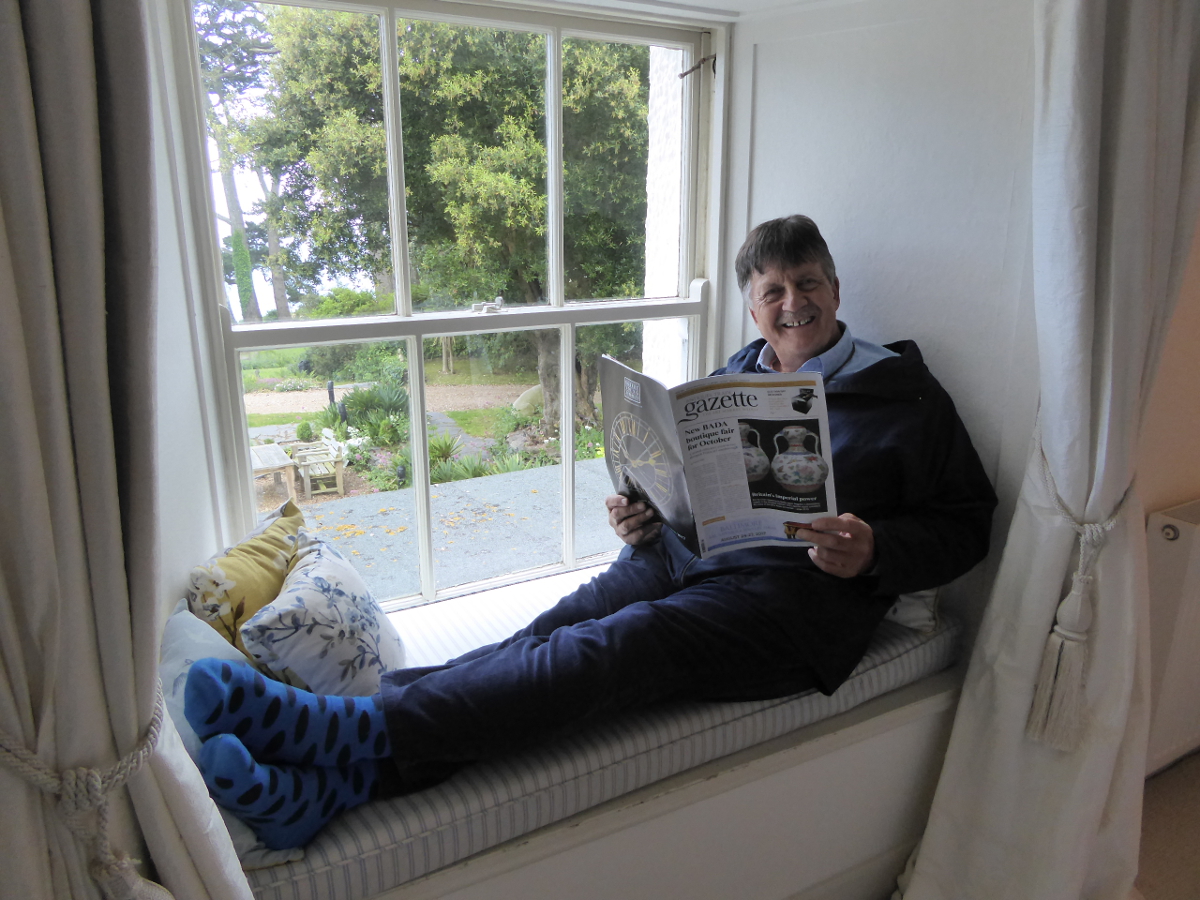